COMPARISON OF GOLD AND SILVER 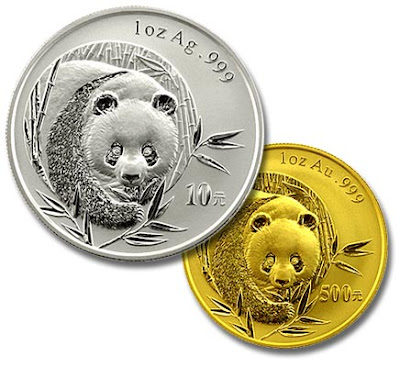 Silver and gold are the most famous metals, especially between women. They are the masters of every lady's jewellery. But, have you ever asked yourself why these two metals are that much important and more expensive than many other types of metals? What are the main features of each one? Is gold or silver has the properties that you are looking for in a metal? The purpose of this essay is to compare and contrast two types of metals (Silver and Gold) in order to clarify their properties for students and those who work in related jobs, or even to add something useful to your knowledge. The features that will be compared include type of metal, symbol, atomic number, atomic weight, conductivity and uses.

There are many shared features between silver and gold that make them similar in many ways. First, both of them are of the same type of metal. Silver is a precious metal, and gold is too. Second, silver and gold were discovered in the same period of history. That was in pre-historical time. Then, another similarity between gold and silver is their atomic radius. Silver has the same atomic radius as gold. It is 1.34. Furthermore, they are also similar in their melting point. Both silver and gold melts at the point around 1000 C. Next, the conductivity properties of silver are the same as those of gold. Silver's electrical and thermal conductivity are as good as gold's. Finally, the use is the last similarity between the two types of metals. Silvers and gold are used to make jewelry in plating, due to their flexibility.

If we contrast silver with gold we can notice some differnces. The symbol of each metal is the first difference between silver and gold. While the symbol of silver is Ag, the symbol of gold is Au. Secondly, the atomic number of each metal is different. Silver has an atomic number of 47. In contrast, gold has an atomic number of 79. Moreover, the atomic weight of silver is not the same as gold's. While the atomic weight of silver is 107.87 gm, gold weighs 169.97gm.When it comes to the specific gravity, silver and gold are different. Silver has a specific gravity of 10.5. However, gold has a specific gravity of 19.3. At last, they differ in their boiling point. Silver boils at the point 2212 C. Unlike silver, gold boils at the point 2966 C.

In this essay we compared two types of metals: Silver and Gold. We compared some of their features such as discovery, atomic radius, specific gravity, melting and boiling points. The comparison shows that both metals have a good ability to conduct electricity and thermal. Also, they could be plated in order to make and design jewelry. Although silver and gold are very similar, they show some differences that make each one special with its features. What I advice you to do is to list the similarities and differences between the two types of metals in your mind, and pick up the metal that matches with what you need or what you are looking for.
Posted by BIG JEWELLER! at 1:52 AM 8 comments: Links to this post

Labels: COMPARISON OF GOLD AND SILVER

IS OUR HANDS MADE JEWELLERY? 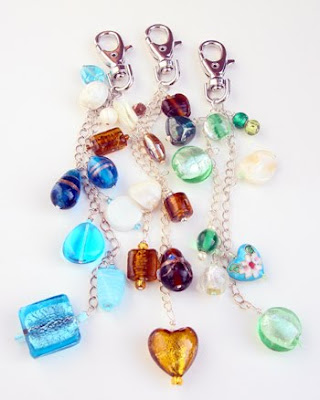 Handmade jewelry is jewelry which has been assembled and formed by hand rather than through the use of machines. According to the guidelines of the FTC, in order to be stamped or called "handmade" the work must be made solely by hand power or hand guidance . In essence, this means that jewelry may be made using drills, lathes, or other machinery, but it must be guided by human hand. This precludes the use of punch presses, CNC machinery and casting to name a few processes that would not qualify as "handmade". Beyond that caveat it can be anything made out of anything that would be considered jewelry. The American Gem Trade Association Spectrum awards , the Gem Center Idar Oberstein, and the De Beers Awards include awards specifically for handmade jewelry.

Although there is much mass produced jewelry in the world, there are many people who prefer to have work that is hand-crafted by a real artisan, and the arena of hand made jewelry and other items will likely remain healthy because of that fact. Much jewelry that is marked or sold as "hand made" often is not truly so, though it may be essentially so. (source: http://www.wikipedia.org/)

Labels: IS OUR HANDS MADE JEWELLERY?

TAKE CARE OF YOUR JEWELLERY... PLEASE CLEAN IT 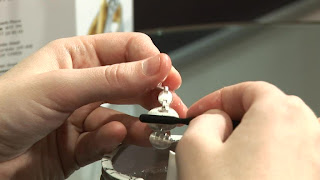 Following are the some important information about jewellery cleaning which is pasted from http://www.wikipedia.org/, I assured you that it is very helpful to all of us.

Maintaining a clean diamond can sometimes be difficult, as jewellery settings can obstruct cleaning efforts, and oils, grease, and other hydrophobic materials adhere well to a diamond's surface. Some jewelers provide their customers with sudsy ammonia cleaning kits. Many jewelers use steam cleaners. Some other jewelers sell small ultrasonic cleaners. Home-based cleaning methods include immersing the diamond in ammonia-based or ethyl alcohol-based solutions, or even a solution of mild grease dissolving detergent and warm water. Silver jewelery can be cleaned using aluminum foil, baking soda, and hot water. However, this practice is not recommended by most jewelers.

Certain types of cleaning can damage some jewellery. For example, some class rings are coated with a dark pigment to reduce their shininess. Some gemstones, such as white topaz, have an overlay to produce certain colors. Ultrasonic cleaning can remove this coating, if it is not a quality piece. Ultrasonic cleaning is also contraindicated for opals, pearls and amber, and any other gemstone that is porous. Gemstones that are glued in (a common practice with semiprecious stones in non-precious methods, and in class rings) should not be placed into an ultrasonic cleaner. An ultrasonic cleaner can cause stones that are loose in their settings to come out. Jewellery should always be examined for overlays and loose stones prior to cleaning with an ultrasonic cleaner or a steam cleaner.

There are a number of things you can do to prevent build up of dirt and prevent jewellery becoming tarnished. Namely; Store jewellery carefully in its original packaging or a jewellery box. Clean jewellery using warm water, mild soap and a soft bristle toothbrush. Use a non abrasive silver cloth or soft lint free cloth to polish jewellery and remove tarnishing. Don't expose jewellery to harsh chemicals or perfumes as this could cause damage and discoloration. Don't wear jewellery when doing anything heavy duty and avoid unnecessary knocks and scratches. Try to avoid spraying your jewellery with beauty products such as hair spray, cosmetics or perfume as this can tarnish or discolour the jewellery. Always put your jewellery on last. Clean your jewellery on a regular basis. Bangles, earrings (particularly those manufactured from hollow tubing) and chains should be worn with care in order to avoid surface damage, and should be removed before going to bed. Check for signs of wear and tear regularly, especially on catches and joints. Stone settings can become loose over time, especially if they have been hit against a hard surface or snagged on clothing.

Although it is not one of the 4 C's, cleanliness affects a diamond's beauty as much as any of the 4 C's (cut, carat, color, clarity).

A clean diamond is more brilliant and fiery than the same diamond when it is "dirty". Dirt or grease on the top of a diamond reduces its lustre. Water, dirt, or grease on the bottom of a diamond interferes with the diamond's brilliance and fire. Even a thin film absorbs some light that could have been reflected to the person looking at the diamond.

Colored dye or smudges can affect the perceived color of a gem. Historically, some jewelers' diamonds were misgraded due to smudges on the girdle, or dye on the culet. Current practice is to thoroughly clean a gem before grading its color as well as clarity.

Posted by BIG JEWELLER! at 2:36 PM 2 comments: Links to this post

Labels: TAKE CARE OF YOUR JEWELLERY... PLEASE CLEAN IT

JEWELLERY OF TODAY AND IMPACT ON SOCIETIES 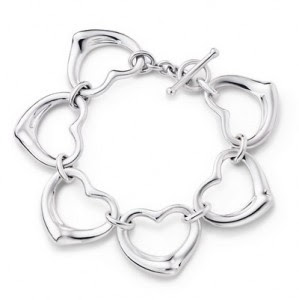 Jewellery makes high and important impact on the society. It is related to the cultures of the nation and languages in the modern world. Jewellery has been used to denote status. In ancient Rome, for instance, only certain ranks could wear rings; Later, sumptuary laws dictated who could wear what type of jewellery; again based on rank. Cultural dictates have also played a significant role; for example, the wearing of earrings by Western men was considered "effeminate" in the 19th and early 20th centuries. More recently, the display of body jewellery, such as piercings, has become a mark of acceptance or seen as a badge of courage within some groups, but is completely rejected in others. Likewise, the hip hop culture has popularized the slang term bling-bling, which refers to ostentatious display of jewellery by men or women.

Conversely, the jewellery industry in the early 20th century launched a campaign to popularize wedding rings for men — which caught on — as well as engagement rings for men - which did not, going so far as to create a false history and claim that the practice had Medieval roots. By the mid 1940s, 85% of weddings in the U.S. featured a double-ring ceremony, up from 15% in the 1920s. Religion has also played a role: Islam, for instance, considers the wearing of gold by men as a social taboo, and many religions have edicts against excessive display.

Posted by BIG JEWELLER! at 1:59 PM 4 comments: Links to this post

Labels: JEWELLERY OF TODAY AND IMPACT ON SOCIETIES 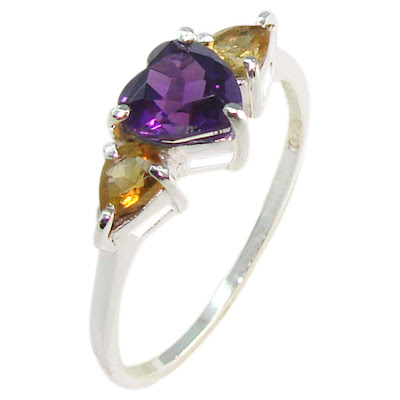 Someone wear jewellery as a personally attachment. Jewelry personal adornments worn for ornament or utility, to show rank or wealth, or to follow superstitious custom or fashion. The most universal forms of jewelry are the necklace, bracelet, ring , pin , and earring . Its use antedates clothing, and it has been made of a variety of materials including berries, nuts, seeds, perforated stones, feathers, hair, teeth, bone, shells, ivory, and metals. Although bronze and silver have been used by primitive peoples and in modern handwrought jewelry, gold has usually been the preferred metal. Jewelry has been decorated by engraving, embossing, etching, and filigree, and by application of enamel, mosaic, gems , semiprecious stones, and glass.
Posted by BIG JEWELLER! at 9:13 PM 10 comments: Links to this post 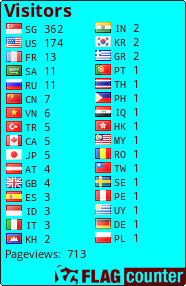 BIG JEWELLER!
I AM A JEWELLER NOT THE BIG BUT LITTLE BIT. THIS BLOG IS FOR JEWELLERY LOVERS.